I just upgraded my laptop to F8T2 several days ago. Heres some of my experience of the journey.

Like Moonshine (F7), Fedora 8 Test 2 releases several ISOs to choose from. The classical DVD installer, a Desktop LiveCD, a KDE LiveCD, plus 2 additional new images -> Fedora Electronics Lab LiveCD - targeted for Electical Electronic geeks, and Fedora Developer LiveCD. As I already mirrored Rawhide repository in my local server, I used the Desktop LiveCD for installation. Note that I prefer clean reinstallation rather than upgrade, plus the LiveCDs doesnt offer upgrade option so far.

Installation was a breeze as usual , just that I forgot to set /boot mountpoint during installation that causes anaconda to crash -> my sda1 is an NTFS partition which i keep a winXP installation just in case i need it, and all other partitions are on LVM besides /boot - this might have what caused the crash. I have my /home on a different partition, just to be safe, I didnt set the mountpoint during the installation. After installation, I edited /etc/fstab to automount my home folder.

New looks at GRUB!, new looks at RHGB!, F7 look @ GDM (huh?). The bootup feels a lil bit faster than before, but it might just be me who felt that. Logging in to my user caused the usual missing applet errors due to they havent been installed. Everything else looked fine.

After using for a while, I noticed stability problem all over, nautilus keep crashing , firefox halts lots of time. The weird thing is, when i tried using a new user, everything seems okay. So I thought it might be a GNOME config problem and I cleared most of my GNOME settings and stability becomes better. However, firefox still halt frequently on my user. A little more investigation shows that SCIM-Anthy might have been the cause, so I stopped using it for a while and I got my firefox back. I have other stability issues with other apps too, but they all went away after a yum update.

YUM speed improved a lot. The depsolving is noticably faster than before. Pirut doesnt frequently hang like before. Joy!. I also noticed theres a plugin in YUM that will keep retrying if yum.pid is locked by another app. This is somewhat convenient as I no longer need to manually rety.

The GTK Nodoka theme design looks good, however it looks fugly in light blue!. GNOME 2.20 now uses a centralized appearance manager, which is cool. From there, I discovered that Nodoka colors can be changed easily through the UI. Double Nice!. A little darkening of the window color, switched the light blue color to dark grey, and Nodoka became pleasing to my eyes ^-^. 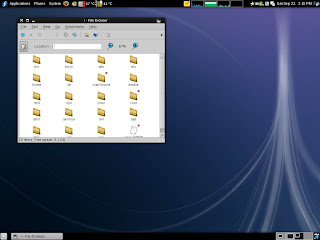 At first pulseaudio pissed me off, why?, coz I didnt hear a thing if I set gstreamer to use pulseaudio. But after a little investigation, I discovered the daemon was not started (duh~). Executed pulseaudio in the command line, and it seems to work. I played around more by yumming for available pulseaudio tools from the repo, and they impressed me. I'm now able to have more controls over volumes in of applications, like right/left channels, and different volume for different apps. There might be more feature I dont know yet, but so far PulseAudio rocks!. 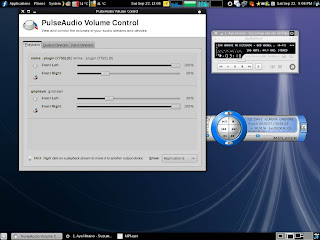 Fedora 8 Test 2 have compiz 0.5.2 included. For some reason compiz doesnt work on the LiveCD, but after installation, it worked with some problems - certain plugins like "move", "resize" were not loaded - gladly it was fixed after a yum update. Compiz Fusion are also in the Rawhide repositories now, (they are not my packages, but Dragoran/Adel Gadlah's). However, libcompizconfig, compizconfig-python, and ccsm are not there yet. Therefore, the compiz from F8T2 uses glib gconf instead of libcompizconfig. A little rpmbuild from my src rpms, and a little editing at /usr/bin/gnome-wm , my compiz is back like it was before.

Due to I'm quite bz with school stuff, I havent updated my packages for quite a while, Leigh@Linux from the fedoraforum looks like have taken over my work, thanx and goodluck Leigh ^-^ .
Compiz fusion thread in fedoraforum

F8T2 might be quite unstable at first, but it getting better as time goes. I'm looking forward for the official release of Fedora 8.

Now , I better get back to my assignments and coursework projects. Until next time.
Compiz Fedora Geek Log Linux PlanetFedora Reviews

Unknown said…
I actually love that shade of blue. There is also a nodoka theme extras package with several other pre-set colors.

I've played around with the color settings myself though just for fun.

But honestly your dark theme isn't my style.

It's too much of a contrast with light backgrounds on documents or web pages.
9:56 AM