Showing posts from July, 2009
Show all

Lost of words to describe the event ...

Entering the hall, DaiCon looks very much like Comic Fiesta, lots of cosplayers around, several booths selling merchandise and figurines, etc. But one difference, the other half of the hall, was the area where the real event, Chihara Minori's Live in Malaysia, took place.

I bought AWSM ticket for DaiCon more than 1 month ago, so I got access to the Q&A session, the concert and entitled for 1 autograph from Minorin !.

Around 3pm, the Q&A session with Minorin starts, the fans went cheering on her arrival!

And everyone went crazy!!!

The session was done in Japanese, and that was one of the few times where my self-learned Japanese language skill comes in pretty handy. Relying to translators on live event is not quite a good idea :P.

We are only allowed to take pics from our seat, which end me up in a situation struggling to get a stable picture (which, erm, generally a fail…
Post a Comment
Read more 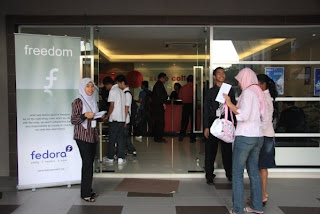 We had a large crowd, more than 90. The audience were mainly students and lecturers who are new or does not know about FOSS, so, like most of Malaysia Team event so far, we did several talks about FOSS and Fedora to give some introduction to them : "What Is FOSS", "What Is Fedora, Fedora Project, and how you can be part of it ", "FOSS artwork tools" (Saito College is mainly an art college), "Security in Fedora".

Besides sponsoring the venue for the event, Saito College also generously sponsored lunch for the attendees. On the afternoon, we held a workshop for installing Fedora11 and …
Post a Comment
Read more

Created some Fedora web buttons to be put on Fedora-My website.