- May 18, 2008
I am a heavy multitasker. I run a lots of apps at once.. sometimes to the point where this dual screen 22" + 14" setup still feels like I need more screen. However, screen space is not the primary problem, but RAM/Swap utilization instead. Its not unusual for me to have 95%+ RAM 90%+ swap (on a 1.2GB RAM with 1.2GB swap machine) utilization with all the apps I ran and freeing the RAM is kindof a tricky task.

I usually use ps and top to detect apps that consume a lot of RAM and stop them. However, the values shown on the commands are hard to be quickly identified due to the scheme of Virtual, Shared, Resident, Swap does not show the values on how I would expect it to be.

So I went googling and I found out about a very ancient tool ported from SGI IRIX called gmemusage. It shows a graphical representation of the memory consumption by apps running on the system in a quite useful display. 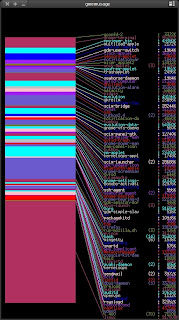 Now I can efficiently find apps that uses lots of memory and free up my RAM without resorting to a reboot.

Anonymous said…
Haha i tot u wanna write a script with matplotlib in python?
5:44 PM