Zekr is an Open Source Quran study tool. This project is planned to be a universal, Open Source, and cross-platform application to perform most of the usual refers to the holy Quran. The main idea is to build an as generic as possible platform to accept different Quranic resources. Site: http://zekr.org/ 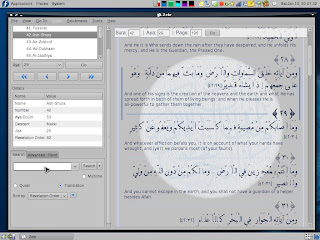 After version 0.6, there are no more RPM packages provided by upstream. So, I've packaged the latest Zekr to fill in this gap. The ideal goal would be to make it in Fedora main repositories, but the licenses might be some problem.

I am not 100% sure whether those data can be included in Fedora with such licenses. So, I've patched the code so that the data can be installed in home directory and separated those stuff in a tarball which will be later automatically grabbed by AutoDownloader (similar to how GnomeSword / Sword Bible Research Tool in the Fedora repositories handle their data files). Also separated into the data tarball are metadata that links to external sites to stream Quran recitation mainly because the external sites are generally using MP3 audio (yep, its a taboo).

Included together in the data tarball is the now public domain Yusof Ali's interpretation/translation of the Quran. For additional Quran interpretation files in various of other languages, grab them from zekr extensions page.

Anonymous said…
I believe we forbid the inclusion of religious items in Fedora. We already don't allow flag graphics for political reasons I would think the same line of reasoning would be applied to religious items.
10:39 PM

Unknown said…
gnomesword and related packages are in Fedora .. and been there for quite some time ..

I believe the forbidden are the texts, the code, as long is its GPL, should be allowed
10:56 PM

Anonymous said…
Jazaak Allaahu khayran for preparing this package. I'm looking forward to testing it! If hosting is needed for non-proprietary recitation files, I'm willing to do so - I already have a plethora of them on hidayahonline.org (technically on audioislam.com now).

Seems everytime you package an Islamic product, someone has to point out religious items aren't or shouldn't be allowed, and you always have to point out they have been for a while.

tajidinabd said…
Salaam Alakium brother I just finished doing the itools package for Fc13 and higher. I really would like to build Zekr in regards to getting it into Fedora. Allah Alim. Do you have any spec files for all the components. The reason it will be tricky to include is due to the mp3 files if they were ogg it be fine. Also if flash is needed that will be tricky. They must meet the right licenses to make it to Fedora. Now you could put in RPM Fusion. So i hope to hear from you soon
10:11 PM

thats a vendor package src rpm, which just does just a little bit more after simply extracting it into /opt/zekr which is to add a proper launcher and system menu ..

I gave up creating a proper package for fedora quite a while ago due to its quite a lot of work to get the missing java dependencies into fedora .. thus, i'm just creating a vendor rpm ...

Unknown said…
zekr have been submitted to rpmfusion based on the work you have done :

- May 24, 2012
In Inigo , we believe in helping out local FOSS communities and help them grow. We help out in community events where we can, present FOSS talks, and provide some platforms for local communities to grow. One of such platform is our consolidated community site infrastructure on Plone . The system/infra and its components was originally developed for the Fedora Malaysia website, while keeping in mind to keep it generic enough so that other communities could use the same components for their own community sites. The infra is already at a usable state, and we can add new sites easily with just a few clicks. Features in this consolidated infra are: Document/Content management (Plone built-in) Calendar system (powered by solgema.fullcalendar addon) Conference/BarCamp system (powered by collective.conference addon, which was developed for FUDCon Kuala Lumpur 2012) Blog (powered by Products.Scrawl) Simple yet powerful theming engine (powered by plone.app.theming/ Diazo) - Check out
Read more