This work is licensed under a Creative Commons Attribution 4.0 International License.
Those who are familiar with BSD Jails or Solaris Zones might be quite familiar to the concept of OS-level virtualization. The Linux world have several options for this, such as the User Mode Linux (UML), OpenVZ, Linux Vserver, and most recently, Linux Container (LXC).

Unlike the other alternatives, which requires specially patched kernels to run it, LXC got fully functional in the upstream kernel since 2.6.29, which is a plus as it made it easier to deploy it in many prexisting distros which ship 2.6.29, including Fedora - without messing around with the distro packages.

In this HOWTO, I'll guide through the process of deploying your own LXC in Fedora 12, with NAT to libvirt's virbr0

(ping me if i forgot to add any packages)

start libvirt so that virbr0 is configured

The lxc rpm provides a script named lxc-fedora to aid creation of lxc container. However, when I tried it, it doesnt quite work. After some googling, I found this guide http://blog.bodhizazen.net/linux/lxc-configure-fedora-containers/, of which, based on it, I've updated the lxc-fedora script accordingly to make it work using febootstrap.

You can grab the script in my FedoraPeople GIT repository here : lxc-febootstrap

Download the script and save it somewhere in you system path.

The script would install the container rootfs in /var/lib/lxc/rootfs/. So make sure you have enough free space to store it (around 400MB for the base bootstrap). You'll also need approximately 400MB in /var/cache/lxc for the reusable vanilla copy of the rootfs.

Answer the questions from the script, and wait until the process is done. At the end of the process, the script would ask for a password for root. Set it.

You can start the container using:


You can start the container in background using:


Connect to a console of the LXC using:

The lxc-febootstrap script have been configured to make use of libvirt's virbr0. It is a virtual bridge, so treat it like any other networking bridge in Linux.

The default configuration of virbr0 (if i'm not mistaken) is that it have dhcp and routing already configured for virtual machines that utilize it. So, networking should JustWorks (unless I missed certain steps in this guide, currently it worksforme). 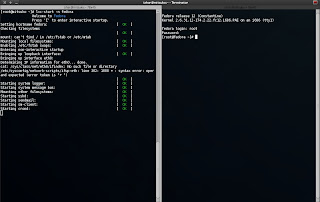 FOSS.Org.MY (formerly: MyOSS) Meetup is BACK!!!! with a new name, and a new format, and new timing!!We will be having Lightning Talk ...

repoze.bfg - Introduction and bootstrapping it on buildout

FOSS.Org.MY Meetup : March 2010
repoze.bfg - Introduction and bootstrapping it on buildout