Showing posts from October, 2010
Show all

- October 31, 2010
Ok i got bored with the old theme. Changed to a new one. This time, its relatively mobile-friendly, mainly utilizes CSS classes from JQuery UI Theming API Do notify me if found any CSS bugs, thanks
4 comments
Read more 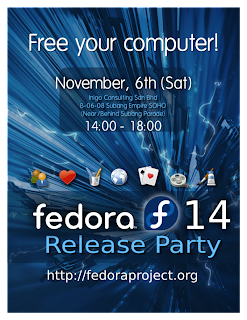 Date: 6th November 2010 (Saturday) Location: Inigo Consulting Sdn Bhd, B-06-08, Subang Empire SOHO Time: 14:00-18:00 What we'll be having there (tentative): Some noms :P (obviously) A Fedora local mirror for anybody who want fast download when installing/upgrading their Fedora to F14 Discussion/planning session on how to kickstart the stalled local community (yep I know most of us are quite busy recently) Games? (bzflag? or any games even, card games such as Monopoly Deal are fun too, you decide ^.^) And probably any random stuff we might came up during that period XD For more info, ping the Fedora Malaysia mailing list at https://admin.fedoraproject.org/mailman/listinfo/malaysian-users Contact (Inigo's Office): 03-56111013
1 comment
Read more

- October 29, 2010
hurm .... trying hard to restart blogging .. been quite occupied recently and been procrastinating on blog for quite a long time .. Anyway, here's some updates on what i've been working on and a rough summary on stuff i've discovered/learnt: Work/Biz Inigo Consulting is growing slowly and steadily. We're getting better in our specialization stack : Plone, Zope3, Component Architecture. We're discovering lots of new ways to be efficient and modular in coding stuff in Python by utilizing the tools and libraries from the Zope Toolkit and stuff developed by the communities surrounding Zope. (eg: buildout , zope.component , zope.schema , grokcore.component ) by utilizing them for non-zope stuff. Learning new ways to package and maintain python eggs, unittest, by utilizing buildout and a number of buildout recipes out there. Recently I've been helping out with Startifact / Martijn Faassen and learned quite a lot of stuff from the work I did for him, mainly in
Post a Comment
Read more
More posts