- April 04, 2011
So I've been on GNOME3 for a few days now. Liking it a lot except for the minor annoyance I mentioned back in my previous post.

It works quite ok to fill the gap the taskbar left behind, but I found the right click to select other window on a multi windowed app takes a bit of 'effort'. Also, the panel appear on the right side, which is a bit uncomfortable as other 'selector'/'menu' stuff are at the left side. So I modified it a bit to change the behavior to:

It filled the gap the taskbar left behind quite well (for me at least), and will be using it until I become comfortable enough to use a workflow that works better with the overview screen. 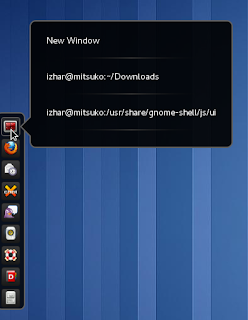 As for the missing system monitor, conky filled the gap just nice :)

There's still one item that I missed from GNOME2, namely the hamster-applet and the international clock. Another thing I would want to see is a pidgin integration extension with the gnome-shell chat system. Telepathy still lacks of proxy support while all my messenger account go through a proxy on VPN.

I'm not familiar with DBus programming and still having very little idea on how to work with the GNOME-JS stuff. Not sure when the features will be available, probably I need to learn DBus/GJS someday if nobody building em.

Update: as requested by a commenter, here are the patch to the dock's extensions.js and the conkyrc used
Fedora Geek Log GNOME Hacks

Anonymous said…
Have you already released your modifications of the plugin somewhere?
2:04 AM

Unknown said…
Just pushed them to my hack-patches git.

- patch to the dock's extensions.js

Anonymous said…
Have you seen this mockup before? It's from back in '09 but I think the idea is rather nice, though it needs a bit of love.
Personally, I miss the old places/devices list in the Shell...
11:40 AM

Unknown said…
nope never read it about it before, though after reading that it seems very similar to this dock except for the auto-hide part - which I'm not sure how to implement, I'm a total n00b in desktop UI programming, I only know some pygtk+glade ..

as for the old places/devices list, I think its nicer if it is made accessible and searchable from the overview screen. probably have it as a tab in between the windows and applications tab ..
10:32 PM

Anonymous said…
The code is somewhere in the git (IIRC, the old sidebar in Gnome Shell would/could autohide).
Now I'm a bit curious...

As for the places/devices list, I agree that it should be search-able, but I think it would be better to have a few commonly used places (bookmarks, if you will) along with removable devices displayed when you go to overview. Quick access to that would be great since desktop links have been nix'd (though I think you might be able to change a dconf key for nautilus to handle desktop?).

Anonymous said…
the conkyrc links are dead ... can you sort that out? I dearly miss the system monitor in Gnome 3!
3:22 AM