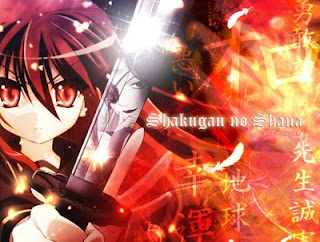 Looks like NTV7 just started showing one of my all time favourite anime! .. Shakugan No Shana!!!!. I noticed it just now, when they air the first episode. And guess what, it remains in Japanese, which ROCKS!!

So, Saturdays: 12:30pm, Malaysian anime lovers get the chance to see Shana in action, on Malaysian TV!. I have the whole 2 seasons (season 2 just ended a few weeks ago) in my anime collection, but I guess I'll still watch the TV version (although, undoubtedly, it might have some parts cut).

First Trinity Blood, then Jigoku Shoujo, and now , SHANA!!!!!!. And all of them broadcasted in the original Japanese language, which preserve the beauty of the original seiyuu, the sound effects, and most important, the moe-ness!!.